Does every teenager go through a Bob Marley phase? My brother and I had Bob Marley posters all over our bedroom walls. A priest who was a friend of my great-grandmother was once getting a tour of our house during a party, and while perusing the posters in my brother’s room read one Marley caption aloud: “Totally stoned!”

Legend played a lot during my childhood. Legend 2 was a revelation when it was released in ’95, and I still love a lot of the lesser known Marley tracks on that album. Trenchtown Rock came to me when I was thinking about writing this post: “One good thing about music, when it hits you feel no pain, so hit me with music, brutalize me with music.”

I don’t think Bob was right on that one. When music hits, it can be all kinds of painful. I’ve gone through periods in life where I have to stop listening to music for a while. Things are too raw, too emotional, and too close to the surface, and music is like a flame to that angsty gasoline. Podcasts are my music alternative. Although even podcasts can get touchy – sometimes I have to take a WTF break if Maron and his guests are getting too bro-y, touching various nerves. Sometimes I have to take a break from Sharon Salzberg and Jack Kornfield if I’m feeling full up of Buddhist instruction, like I KNOW, GUYS, I KNOW, LETTING GO, I GET IT. Sometimes I have to take a break from Guys We Fucked if I’m not getting any and feeling super annoyed about it. My Brother, My Brother and Me is pretty perennially safe – chilled out comedy stylings of adorable brothers – it’s all good.

Picture the scene: School dance, 1992. The opening strains to November Rain. The boy I have a crush on walks my way. I adjust my glasses and ponytail. He asks me to dance. I hold my breath. We sway around a bit, barely touching. Now, are you familiar with November Rain? Well, it’s a long song. And there’s a part about three quarters in where it sounds like the song is ending. This part comes, and I break away from my partner, thanking him and walking away. BUT, the song ending is a fake-out. It keeps going! Oh, the embarrassment. He disappeared quickly and I stood there sort of swaying around by myself.

June 4th, 1994. I wish I could say this was the only occasion on which I copied the lyrics of November Rain into my diary.

I had a crush on this boy for years – YEARS –  in a crazy, stubborn, dogged way (see also: claw marks) despite the fact that he appeared to have no interest in me whatsoever. I was very determined. A lot of songs symbolized our pretend relationship over the years, but November Rain was the first.

Brighton. I’m sitting near the rotten old pier, out of ideas. I light a smoke, my limbs feeling like lead as I lift the little purple lighter and purse my lips around the cigarette, squinting at the sun. It’s windy, and there aren’t many people at the beach. I’m sheltered by the seawall, but it still takes a few tries to light the cigarette. Everything is blank. I inhale and look over to three girls huddled together a few feet away. They’re a blur of thick stripes, black eyeliner, worn-out sneakers, and day-glo brights, looking fourteen and precious. They’re fiddling with some sort of speakers that are emitting reams of static. I expect some sort of angsty skinny boy rock to blare out, but when the static ceases, David Bowie’s ‘Modern Love’ blasts forth. The girls snap their gum. I am staring and I feel something like camaraderie, something almost maternal.

I know when to go out

And when to stay in

I catch a paper boy

I’m standing in the wind

But I never wave bye-bye

My lips are dry and cracked and the pain in my temple threatens to make me laugh, for a second with the ridiculous conclusion of it all, of where I’ve ended up.

I wait. I grind my cigarette into the sand and light a second smoke, my hands shaking all over the place and my heart jumping all over my throat. I don’t know what to do, but I know I need more to drink in order to facilitate anything at all.

Go watch the video of Fleetwood Mac doing Silver Springs as part of The Dance reunion. Trust me. One late hot night in June I watched said video while sitting on the balcony (those were the heady days in which I still had a balcony). I had – wait for it – AN EPIPHANY. I dedicated myself at once to Better Living Through Fleetwood Mac.

In a nutshell: I am a sucker for a romantic, dramatic, fiery grand narrative. In that Silver Springs video, Stevie Nicks is such a bona fide badass that she is singing “you’ll never get away from the sound of the woman that loves you” while making intense eye contact with her ex, Lindsey Buckingham, and he’s got this haunted look like he knows it’s true. I’ve constructed big fiery passionate narratives with various people at various times over various years. But what if the fire, the bit I was kind of in love with was in me the whole time and not tied to any particular person after all? What if I don’t have to worry about getting older because that gritty passion will always be there in me no matter how old I am and I’ll be like Stevie and the various Lindseys of my life will be like, uh, Lindsey? I think it was an epiphany rather than a psychotic break. 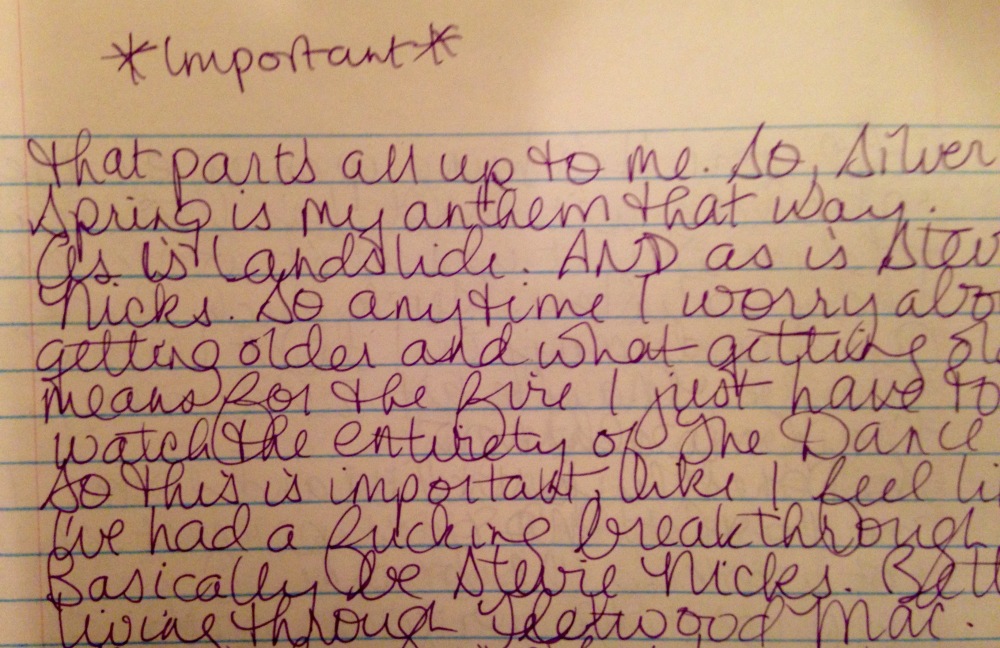 There are, of course, so many more songs to write about. In time. Tonight I’m rocking some Violent Femmes. Highly recommend.